Clodagh and Saoirse hard at work

Over the past weekend, the queues outside what used to be Mansfield’s heralded the arrival of a new enterprise, The Food Doc Artisan Deli, based in the front where the old shop used to be. The door is open and inside, Clodagh Walsh and her daughter, Saoirse, bustle about making sandwiches and salad plates for the hungry cyclists and busy moms. The house itself was the last of the empty, derelict buildings on that side of the Main Street and needed a great deal of work. Occasionally I would check in with Jason and Clodagh as they worked on the place. Little did I realise the extent of their modifications and how the change to the Main Street would be more than just a new fresh coat of white and blue paint. The day before the deli opened, I sat with Clodagh in her very well provisioned kitchen to chat about the journey that brought them, and the Deli, to Clashmore.

I started with the question so many asked me when we moved here: “Why Clashmore?” “I was running the bar down in Piltown, the Old Mill, and I met Jason there and we’re thirteen years together. His homeplace is in Clashmore, down by the Lickey. His business is there and we were looking for somewhere nearby. This house had just come back on the market and we were lucky to get it.”

Clodagh (née Moloney) is from Ardmore. Growing up in the area, she and her family socialised a lot in this village. For a while, her brother had the pub that is now May O’Rourke’s and she herself worked there. Coming to Clashmore just felt right. “I hadn’t even thought about opening the deli,” she confessed. “It’s just that when we bought the place I realised that there was a shop. It would have been a shame to convert it into a bathroom. Everything was the same as it was years ago. I’m a chef by trade and the kids are now old enough, school age. I could work from home and bring something to the area. Everything just fell into place.” Chef by trade is key. Clodagh is no beginner and this is no hobby. She has run a restaurant in Ardmore, worked at the White Horses, and got her training at Ahern’s in Youghal.

While the work on the living quarters was underway, Clodagh began to plan out what would work best for her family and the village. “When we moved to Clashmore, Jason would ring me and tell me that he and two or three lads with him would be coming to lunch. I’d have to run into town to get fresh salads, couscous, pasta, potato salad or coleslaw. That kind of planted the seed for what I could add: a fresh salad bar along with home baked artisan bread, quiche and hot and cold deli items. I thought it would be nice to have something on a small scale here.” 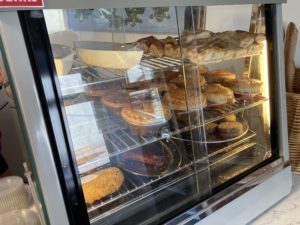 The possibilities are many: catering for birthdays and 1st Communions, picnic lunches for folks going to the Greenway or St. Declan’s Way, even late night pizza and chips on weekend evenings. But this can wait until everything needed in the kitchen is up and fully running. “When I was doing my research here I was amazed,” said Clodagh. “Between Ardsallagh and Ballycurrane there are 15 AirBnBs. The Deli is completely take-out. If people want something to take back or out and about while they’re on holiday, they can!”